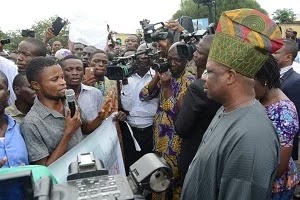 BEING THE COMMUNIQUÉ FROM THE COMMUNIQUÉ DRAFTING COMMITTEE AT THE NANS JCC OGUN AXIS SENATE MEETING HELD ON 25TH OF SEPTEMBER, 2017 AT OGUN NUJ SECRETARIAT, IWE IROYIN, ABEOKUTA, OGUN STATE.

In a bid to bring about a responsible, responsive and effective representation of all Nigerian students struggle in Ogun State, the leadership of National Association of Nigerian Students, NANS Ogun JCC Axis Under the chairmanship of Comr. Balogun Olawale a.k.a MOVEMENT held her senate meeting at Ogun State NUJ secretariat, Abeokuta, Ogun State on September 25, 2017.

The senate meeting started with an opening prayer by Comr. Sanni Rahmon (UBUNTU), the Student Union President of Tai Solarin University Of Education (TASUED). After which the entire Executive, Senators, Cadres and observers from different tertiary institutions across the state rose to their feet in solidarity solace and paid one minute silence in honour of late Comrade SEUN PLUS who died of chronic typhoid. Until his death, he was a member of the Executive of NANS JCC OGUN AXIS, may his soul continue to rest in perfect peace, Amen.

The NANS Chairman however moved a motion to set up a Communiqué drafting Committee for the purpose of the sitting and the senators nominated and confirmed the members with the Chairman approval as follows:

In another development, the NANS Chairman quickly gave the present state of NANS OGUN JCC, he highlighted some of the major achievements the administration has recorded since its inauguration which include the following:

1. Intervention on the issue of Tax clearance at TAI SOLARIN COLLEGE OF EDUCATION, Omu-Ijebu

2. NANS OGUN JCC organized an entrepreneurship program for students across the tertiary institutions.

4. Facilitation of releasing of some arrested Students of TASUED and some other institutions in the state.

5. We have been able to ensure the continuity of police Students relation forum in Ogun State.

7. Facilitate the reinstatement of two MAPOLY students that were suspended.

And many more things which are numerous to mention.

Having highlighted that, the Chairman stated the agendas of the meeting which are:

1. The issue of MAPOLY

3. Conditions of primary and secondary schools across the state

Due to the issues at hand, the chairman however made a request to all Senators to state obvious challenges on their campuses which those challenges were clearly stated as follows:

While some senators said there were no issues whatsoever in their higher institution, the larger chunk of them said they are facing the problem of infrastructure, most state owned tertiary institutions across the state are facing infrastructural challenges ranging from dilapidated lecture theaters/rooms, outdated buildings, inadequate lecture rooms, uncompleted lecture rooms, bad road networks within the school premises and unconducive learning environment. All these occur due to the failure of the state government to provide proper funding to those institutions.