The Catalans saw their Champions League
hopes hit hard after a string of strange
selections from their coach and a 3-0 loss in
Italy
There was a feeling of déjà vu. After their 4-0
defeat at Paris Saint-Germain in the last 16 of
the Champions League, the Blaugrana produced
a similarly dreadful display away to Juventus on
Tuesday. And this time it will be much more
difficult to turn it around.
Barca beaten by Deportivo at Riazor
Barca famously thrashed the French champions
6-1 at Camp Nou in March to advance against
all odds to the last eight, but a loss like that
versus the Bianconeri would surely be harder to
overturn and Italy legend Dino Zoff told Goal in
the build-up: “There’s no way Barcelona could
come back from 4-0 down against Juventus.”
They do not have to, but 3-0 is almost as
disastrous for the Catalan club and in many
ways, it seems the PSG comeback has masked
some serious issues for Luis Enrique’s side –
and one of those is the coach himself.
Luis Enrique won the treble in his first season
as Barca boss, claiming La Liga, the Copa del
Rey and then the Champions League in Berlin
with a 3-1 win over Juventus. Two years on,
however, this is not the same side and that
showed against PSG.
The summer signings were not good enough
and at times, Luis Enrique has been too
stubborn as well. For this match, he again
selected the 3-4-3 system that has served the
side so well in recent weeks, yet the presence
of Jeremy Mathieu in defence was baffling.
Pique hits back at Barca critics
The French defender backtracked as Juan
Cuadrado ran at him and passed inside for
Paulo Dybala to turn and fire the first goal after
just seven minutes. It was not his fault, but the
action summed up his contribution: far too
passive.
Dybala then fired home a super second, but
was given time and space to shape and shoot in
the Barca box and again the defence was far
too slow to cut out the danger. And at this level,
those mistakes are punished – just as they
were at the Parc des Princes.
Mathieu was hauled off at half-time, just as he
had been at Malaga on Saturday. With Jordi
Alba available and Javier Mascherano able to
play in a three-man back line, his was a
strange selection. But what followed was
equally bizarre.
With Mathieu brought off, Luis Enrique sent on
another of Barca’s much-maligned players this
season: Andre Gomes. The Portuguese
midfielder is not a bad player, but he has simply
not adapted to Barcelona and has been present
in all of the team’s poorest performances in
2016-17.
B arca always believed in comeback – Luis
Enrique
Luis Enrique was asked about the former
Valencia man in the pre-match press
conference and called the journalist in question
“pathetic” and “deplorable”, but his player did
little to prove the doubters wrong in the second
half in Turin. Giorgio Chiellini headed a third goal
and Barca barely reacted in midfield – although
Luis Suarez squandered a good chance after he
was set up by Messi (and Andres Iniesta had
earlier missed another).
Messi, Suarez and Neymar usually get
Barcelona out of trouble and with those three in
the team and Busquets back for the second leg,
the Catalans will have a chance of turning this
around again. But Luis Enrique’s stubborn
selection cost the Catalans dear in this match
and Juventus will not fold as PSG did at Camp
Nou last month.
That comeback was wonderful, of course, but
after this loss there is the feeling that Barca
have now used up their nine lives in the
Champions League this term. After all, two
historic turnarounds is a lot to ask – even for a 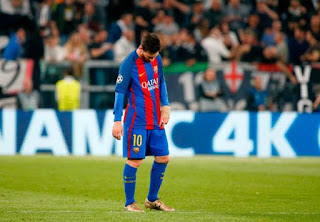 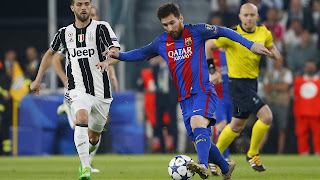 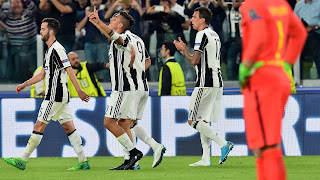 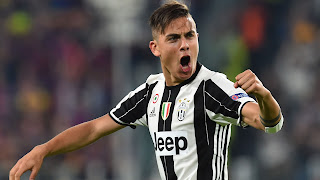